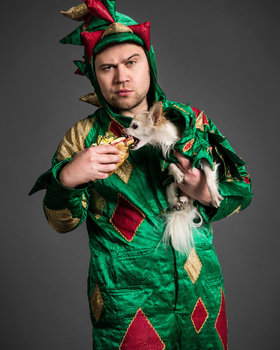 All Piff Private Party ticket holders will receive:
- A poster signed by Piff
- A photo with Piff and / or Mr. Piffles
- A chance to get a video shout out to kid or friend from Piff
- A chance to win Mr. Piffles (joke)
- A one on one magic trick

With five record breaking runs at the Edinburgh Fringe and two sell-out seasons at Soho Theatre in London’s West End, it was an appearance on Penn & Teller’s hit show Fool Us which led to global awareness for the Godzilla of the magic world.

12 million YouTube hits later and Piff has performed to hundreds of thousands of people in world famous venues such as Radio City Music Hall, Shakespeare’s Globe, the O2, London, and Sydney Opera House.

He was the opening act for Mumford & Sons on their 17 date UK tour, and has just completed a six month residency at The Cosmopolitan of Las Vegas in their flagship show Vegas Nocturne, as well as headlining his own show Breakfast at Piffany's.

Accompanying Piff on his many adventures is Mr Piffles, the World's First Magic Performing Chihuahua, who has been levitated, laminated, shackled in a strait jacket and shot out of a cannon all in the name of entertainment.

‘Cute, inspired and very funny. The only word is heroic. A hugely entertaining hour of grumpy magic.’ **** Time Out

'Mind bending. A complete mastery of his craft.' - The Scotsman

‘The last of his species: a card trickster who is funny.’ - The Skinny

‘Piff the Magic Dragon steals the show. A stand out act.’ - The Metro

‘Genuinely side-splittingly funny and lives up to its hype’ - ArtsHub
No audio samples have been linked to this profile.