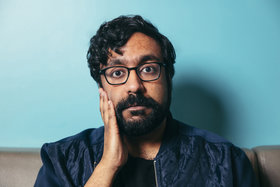 A night of comedy with

Hari Kondabolu is a comedian, writer & podcaster based in Brooklyn, NY. He has been described by The NY Times as “one of the most exciting political comics in stand-up today.” In 2018, his Netflix special “Warn Your Relatives” was released and he was named one of Variety’s Top 10 Comics To Watch.

Hari has released two comedy albums two albums, “Waiting for 2042” & “Mainstream American Comic” with the legendary indie rock label Kill Rock Stars. He has performed on The Late Show with David Letterman, Conan, Jimmy Kimmel Live, John Oliver’s NY Stand-Up Show, @Midnight & has his own half-hour special on Comedy Central. A former writer & correspondent on the Chris Rock produced FX TV show “Totally Biased with W. Kamau Bell.” In 2017, he released his critically acclaimed documentary “The Problem with Apu” on truTV.
No audio samples have been linked to this profile.

A writer/performer and stand-up, Molly Austin broke into the comedy zeitgeist with her comedic music videos on TruTV’s Late Night Snacks. In 2018, Molly was one of 14 stand-ups selected for Comedy Central’s UP NEXT at Clusterfest. She can also be seen as one of the stand-up comics on this past season of LAFF MOBB’S LAFF TRACKS and was recently a writer and producer on VICELAND’S evening talk show, VICE LIVE. She recorded her first comedy album this June in New York City.
No audio samples have been linked to this profile.