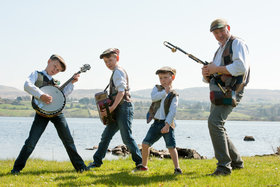 The Byrne Brothers and a family band from Donegal, Ireland, who are currently taking America by storm!

They are Luca, 15, on Accordion, Finn,13, Banjo, Dempsey,10, on Bodhran and Dad Tommy on Guitar, Fiddle, Uilleann Pipes and Bagpipes. They are all County Champions on their instruments as well as Ulster Champion Irish Dancers. Last year they moved to Orlando Florida where they became the youngest ever cast members of Disney. After a year in Disney they are now touring America and are looking forward to making Hawaii their 45th State to perform in. They have had 5 viral videos with over 30 million views on social media. Oh and they are surfers too!

Their show is for all the family with lots of lively music that will have you dancing in your seat, well known Irish songs you can join in with, world class Irish dancing and then they'll have you laughing your socks off with their fun on stage. This is a show not to be missed. Irish Music Magazine said The Byrne Brothers are "Taking Irish Music and Dancing to a whole new level" and that "Their performance at Milwaukee Irish Fest (the largest Irish Festival in the world) was 5 star."

The Byrne Brothers are a Family Band from Dublin who moved to Donegal for a few years and now live in Orlando Florida.

They are all County Champions of their Traditional Irish Instruments, Duo and Trio Champions and Ulster Champion Irish Dancers. Even their Dad Tommy was Dublin Champion on Bagpipes back in the day and now plays with them on Guitar, Uilleann Pipes, Fiddle Whistles and Bagpipes.

Their Show is fast paced with brilliant musicianship on multiple instruments, exciting and dynamic arrangements as well as world class Irish dancing.

2015 - The Byrne Brothers shot to fame in Ireland (after auditioning along with 10,000 other kids) and getting on The Late Late Toy Show, Ireland's biggest TV Show... every Irish kids dream.

In 2016 a video of them playing on the street at the Fleadh went viral with 3.4 million views and was the most viewed video from Ireland in 2016.

They got approved for their US green cards through their "Extraordinary Ability in the Arts" (EB-1 Visa) in August 2017, sold their house in Donegal in December and were on a plane in Jan 2018 to start our new life in America where they took up residency in Raglan Road for 6 months.

While at home in 2017 te Byrne Brothers had another 3 viral videos. 2 on the streets of Galway 21 Million views and another from Oliver St. John Gogarty's Irish Pub the night before we left Ireland, currently with 4.1 million views. Their Galway video was the most viewed video from Ireland in 2017 and their videos have been shared almost 1 million times.

Summer 2018 they toured 39 US States performing at Festivals, Theaters and Irish Centers.

They have a new self titled CD which got great reviews and highly recommended from The Irish Music Magazine.

2019 The Byrne Bothers performed again Raglan Road and are currently on a 5 month US Tour and will finish in October in Hawaii.

They are also avid Photographers and Videographers and have started filming and vlogging their adventures. Their Vlogs can be seen on The Byrne Family Vlogs Chanel on You Tube.

"Our plan is to continue Living the Dream - traveling the world with our music, surf coolest beaches and share our adventures with photos and videos on our social media.
No audio samples have been linked to this profile.