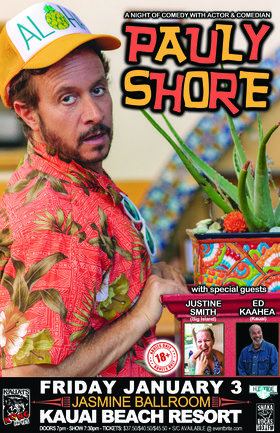 A night of comedy with Actor and Comedian

Born into a life of comedy Pauly Shore is seared into the public consciousness for his attention-grabbing comedic talents and his meteoric rise to notoriety in the 1990’s with starring roles in popular film comedies acting-up as MTV “VJ” and show host and performing his stand-up at national comedy clubs including legendary venue The Comedy Store – where Pauly continues to work and perform.

An entertainment career was virtually pre-ordained for Pauly Montgomery Shore. At age 4 he sat on the lap of The King himself in the company of his father comedian Sammy Shore who opened for Elvis during the early ’70s. Around the same time Pauly’s mother Mitzi and father opened The Comedy Store on Hollywood’s Sunset Strip giving their son the rare opportunity to hang out and be inspired by such rising talents as Robin Williams David Letterman and the late Sam Kinison who became Pauly’s mentor.

At 17 Pauly began writing and performing his own material creating the persona of “The Weizel ” a character that quickly appealed to young audiences. In 1990 Pauly caught the attention of MTV and the network gave him his own show TOTALLY PAULY. His initial success on television led to a three movie deal with Disney beginning with the box-office hit ENCINO MAN co-starring Sean Astin and Brendan Fraser. Pauly followed up ENCINO MAN with the popular comedies SON-IN-LAW IN THE ARMY NOW JURY DUTY and BIO-DOME.

In 2003 Pauly produced wrote directed and starred in the critically acclaimed PAULY SHORE IS DEAD a semi-autobiographical mockumentary in which he satirizes the perils of Hollywood. In the film Pauly loses everything and decides to fake his death in a quest for post-mortem adulation. He called in a lot of favors to get the project made and managed to wrangle star cameos from the likes of Sean Penn Whoopi Goldberg Ellen DeGeneres Dr. Dre Clint Howard Perry Farrell Fred Durst Verne Troyer Andy Dick Mark McGrath Jerry Springer Montel Williams Sally Jessy Raphael Kurt Loder and Paris Hilton to name a few.

Next Pauly returned to TV in the TBS reality series MINDING THE STORE which he produced as well as starred in. This was followed by a notable recurring part as himself on the hit HBO series ENTOURAGE. In 2008 Pauly once again stepped into producer director and star roles with the sketch comedy movie NATURAL BORN KOMICS for which Pauly received the 2008 Entertainer of the Year Award from the Entertainment Merchants Association.

Pauly continues to produce and direct with his latest feature the critically-acclaimed Adopted which was released in 2010. In the film Pauly satirizes the phenomenon of celebrity adoptions as he travels to Africa to adopt an African baby.

Pauly’s latest project the 90-minute comedy variety special VEGAS IS MY OYSTER which Pauly wrote produced and directed – airs this fall on Showtime and includes talent such as Andy Dick Charlene Yi Bobby Lee Amber Lancaster and Playboy model and adult film star Bree Olson. Pauly also continues to tour the world with his stand-up comedy and has several short subject films and multiple projects in the works such as his MTV pilot called “The Shores” and various projects with Will Farrell’s website FUNNY or DIE.
No audio samples have been linked to this profile.

The old adage, laughter is the best medicine, proves to be true as Hawaii Island residents line up for their much-needed doses of snorts and belly laughs. The comedy scene is taking off on the Big Island, and one funny lady is making audience’s cheeks hurt over her brutally honest, everyday experiences. Kona resident, Justine Smith recently made her comedic debut on Hawaii Island a couple of years ago, and has since gained a loyal following of fans.

Justine Smith runs a monthly comedy showcase in Kona, through her production company "Dirty Girl Productions". She won KMA Productions 2017 Best of Kona Comedy Tournament. She is one of Hawaiian top rising comedians and headed for stardom.
No audio samples have been linked to this profile.

Because of his theatrical roots (doing plays) and experience with Booga Booga, Ed Kaahea is “intrigued, not apprehensive,” about coming aboard with his comedy peers. “It’s a collection of bodies of work that cover a period in our entertainment history for which I have a lot of affection,” he said. But, Kaahea added, “my entire life is ? ashing by, being together with balding, older comics; we’ll either be politically correct, or the laughing stock.” He’s a vegetarian and somewhat of a new man because he’s now an ordained pastor with the Gateway Ministries of Hawaii. “Because I was brought up in a religious family — my grandfather was a pastor in a family of pastors — and I had a moment of epiphany in the late ‘90s, when Jimmy died (James Grant Benton, who, with Rap Reiplinger and Kaahea, were Booga icons) and I became a pastor.” He previously operated Ed Kaahea’s Kalapahi Comedy Club, at the Marriott on Kauai. And he does a religious radio show on KESU on Kauai. But he’ll soon move to Hilo, to be with his moopuna (grandchildren), and plans to form the Hawaii Actors Repertory Company, at the Palace Theatre, with colleagues Arnold Hiura, David Farmer and Scott Johnson, to reboot his stage roots.
No audio samples have been linked to this profile.