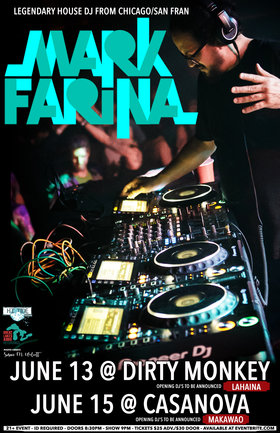 Mark Farina has solidified himself in the world of Dance Music as a trailblazing DJ, Producer, tastemaker and bona fide House Music icon. After 3 decades crisscrossing the globe, he shows no signs of slowing down remaining innovative, humble, and firmly rooted in the underground.

“I look at my job as a ‘modern day traveling minstrel’ bringing new music to as many places as I can and exposing audiences to obscure records that otherwise might go hidden.”

As an early House Music pioneer in the late 80’s, Farina’s history includes an impressive long standing residency at Smart Bar Chicago and a job at the legendary Gramaphone Records. In the 90s, Mark pushed musical boundaries and blended genres to create “Mushroom Jazz”. Eventually, Mark made San Francisco his home as his signature sound created a strong demand for his DJ sets. The Bay Area proved to be a perfect match for Mark’s musical vision and he released a string of major mix compilations including his Mushroom Jazz series. With a tireless passion for playing extended sets, B2B shows with fellow House Music icons, or playing both of his signature styles on 2 stages on the same night, Farina continues to entertain his incredible fans all over the globe with over 100 shows per year.

Currently, Farina is the head honcho at his record label, Great Lakes Audio Recordings. Next up in 2018 are residencies at House of Yes (NY), Grasshopper Underground (MI), and Site 1A (MKE).

http://Http://djmarkfarina.net
Shortly after Mark befriended Derrick Carter in 1988 at a record store in Chicago, his passion for House music, and sharing it with the world, exploded.

Mark experimented with a deeper style, dropping De La Soul, disco classics and other stuff that wasn’t being played in the main rooms of nightclubs. While exploring his love for the purist forms of House Music, Mark developed his trademark style: Mushroom Jazz; acid jazz infused with the West Coast’s jazzy, organic productions combined with urban beats.

Fans embraced Mark’s downtempo style so much that he started a weekly Mushroom Jazz club night in San Francisco with Patty Ryan. In 3 short years, the club established a fanatical, cult-like following for Farina and the Mushroom Jazz sound. When the doors closed, Farina continued the tradition by releasing a series of Cds on OM Records: simply titled, “Mushroom Jazz”.

Since then, Mark has been traveling the globe performing 100s of shows, to over one million club goers, every year. His House sets take fans on journeys to the jazzy side of Chicago House mixed San Fran style. Some of these sets have been known to last up to 8 hours. And sometimes you’ll find Mark playing in two different rooms at the same party, showcasing his range of big room sound to the uber-chill.

When Mark’s not touring, you can likely find him in his studio, working on his next release for his imprint, Great Lakes Audio, or on another signature mix for Mushroom Jazz.

Mark’s chunky-funky underground house style continually turns the heads of tastemakers worldwide, drawing him not only new fans, but landing him on the Top DJs in the World lists by URB, MUZIK and BPM Magazines.
No audio samples have been linked to this profile.