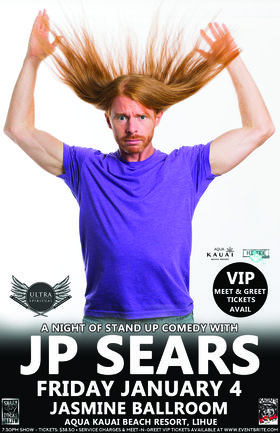 Event Page
7:30pm - 9pm doors at 6:30
Comedian and YouTube superstar, JP Sears, will be performing his comedy show at The Jasmine Ballroom at the Aqua Kauai Beach Resort in Lihue, Friday, January 4, 2019. Tickets go on sale November 14 to the general public at 9am. Show time at 7:30pm. This is an ALL-AGES show.

Tickets are $38.50 + service charges and VIP tickets are also available and can be bought at http://www.eventbrite.com. The Jasmine Ballroom is located at 4331 Kauai Beach Drive, Lihue.

Because of his theatrical roots (doing plays) and experience with Booga Booga, Ed Kaahea is “intrigued, not apprehensive,” about coming aboard with his comedy peers. “It’s a collection of bodies of work that cover a period in our entertainment history for which I have a lot of affection,” he said. But, Kaahea added, “my entire life is ? ashing by, being together with balding, older comics; we’ll either be politically correct, or the laughing stock.” He’s a vegetarian and somewhat of a new man because he’s now an ordained pastor with the Gateway Ministries of Hawaii. “Because I was brought up in a religious family — my grandfather was a pastor in a family of pastors — and I had a moment of epiphany in the late ‘90s, when Jimmy died (James Grant Benton, who, with Rap Reiplinger and Kaahea, were Booga icons) and I became a pastor.” He previously operated Ed Kaahea’s Kalapahi Comedy Club, at the Marriott on Kauai. And he does a religious radio show on KESU on Kauai. But he’ll soon move to Hilo, to be with his moopuna (grandchildren), and plans to form the Hawaii Actors Repertory Company, at the Palace Theatre, with colleagues Arnold Hiura, David Farmer and Scott Johnson, to reboot his stage roots.
No audio samples have been linked to this profile.