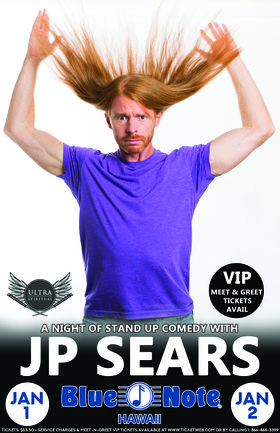 Event Page
7pm - 8:30pm doors at 6pm
Comedian and YouTube superstar, JP Sears, will be performing his comedy show at The Blue Note on January 1 & 2, 2019, 2 nights. Tickets go on sale November 14 to the general public at 9am. Show time at 7pm. This is an ALL-AGES show.

Pepper is a comedian/actor based in Honolulu, Hawaii. He has been writing since his college days. In between sports, he dabbled in acting in different comedic skits, improv, and independent short films. He has recently taken comedy and acting full scale. Pepper recently finished an off Broadway production of The Full Monty. As well as working comedy clubs and shows throughout the mainland US, Pepper is a beloved regular in the Honolulu comedy scene.

Pepper has opened up for many top level comedians in the business like Katt Williams, Brian Poseign, Iliza Shlesinger, Martin Lawrence and Brian McKnight just to name a few. His relatable brand of smart comedy, pokes fun at pop culture and our everday lives. Realism, professionalism and great laughs are his calling cards.
No audio samples have been linked to this profile.