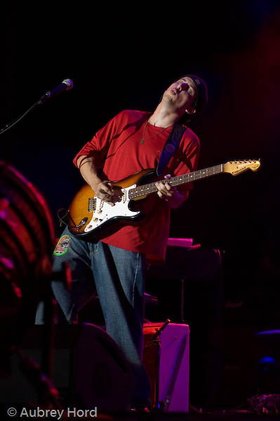 Vince is our guitar god of Maui, purely shredding with a strong, heartfelt voice, it's not a surprise why you might see Steven Tyler at a Vince Esquire show and loving every moment of it. Gregg Allman loved Vince's music so much he invited him to be his opener for a tour. It's been five and a half years since Vince and the boys took the stage and on October 12 at Mulligans on the beautiful island of Maui, we are breaking the ice! There's been a lot of steam brewing up ready to explode on a hot autumn night.

Who is Vince Esquire?
Vince Esquire (Vincent Esquer) was born May 18, 1985 in Oakland, California and moved with his family to Maui, Hawaii at the age of four. His father, a professional saxophonist, exposed Vince to music at an early age. As a youngster Vince showed exceptional ability on drums and at six years old was performing in his dad's band. In elementary school Vince played the trumpet and trombone and at eleven began playing and excelled on the ukulele. At thirteen, he formed a contemporary Hawaiian music trio that performed at local restaurants and coffee houses. At fifteen, mesmerized by a TV biography of Stevie Ray Vaughan, he chose to devote himself to the guitar. Shortly, his phenomenal talent emerged.

At age sixteen, while attending a summer program at the Berkeley Jazz School, he caught the attention of Ronnie Stewart, President of the Bay Area Blues Society, who recognized Vince's extraordinary ability and featured him at the Oakland/Russell City and Dunsmuir Blues Festivals. At the Dunsmuir festival he played with the legendary Sonny Rhodes and was noticed by Sammi Barber, President of the Shasta Blues Society, who invited him to play at the Shasta/Redding Blues Festival where he was featured with Coco Montoya and Tommy Castro.

Back on Maui, Vince was a popular guest with many of the Maui's best bands and was featured at the Annual Rhythm & Blues concert headlined by guitar greats, Eric Johnson and Chris Duarte.

At seventeen, Vince formed his own band, The Vince Esquire Band, and found success playing the island's top venues. Later that year, Vince and his band toured Hawaii with the Derek Trucks Band and Little Feat and was featured at the annual Willie Nelson Montessori festivals on Maui where he met and performed with Los Lonely Boys. Also that year, Vince released his debut album, First Offense, produced by Johnny Winter bassist Mark Epstein.

In 2004, while living in Austin, Texas, Vince was honored with a personal invitation by Willie Nelson to perform at his annual 4th of July Festival in Dallas, Fort Worth where he appeared before a crowd of 50,000 enthusiastic fans. In 2005 and through 2006 Vince has continued to amaze crowds throughout the Hawaiian Islands and The West Coast, playing Los Angeles, San Diego and the Bay Area. His performances have featured both his electric guitar skills as well as his incredible gift playing the ukulele. His shows with Maui band Kanekoa, where he plays lead electric ukulele, and Hawaiian performances with Raiatea Helm have been unforgettable for all in attendance. Past 2006 Vince Esquire Band shows include the Redding Blues Festival, September 16th, The Mint, in Los Angeles, September 21st, and 710 Beach Club, in San Diego, September 22nd.

Vince has recently completed recording his second record, "Songs In The Key of E", with multi-instrumentalist/producer Dave Cochrane, who has worked with artists such as The Commodores, Lionel Ritchie, Paula Abdul, LL Cool J and Public Enemy, and drummer Josh Greenbaun who has performed the likes of River Phoenix and Lenny Kravitz. The album will be released under D.R.I.V.E entertainment in the near future.

In 2007 Vince was granted a personal invite from blues/rock icon Gregg Allman to join the legendary Allman Brothers at their prestigious annual run of shows at the Beacon Theater in New York City. Gregg was so impressed with Vince's ability and professionalism, that he extended a further invitation to join the Gregg Allman Band as the opening act for several dates of their southern tour, thus leading Vince to embark on his first national stateside tour with a national act. Vince received tremendously positive responses at the House of Blues in both New Orleans and Dallas, as well as the Meridan in Houston and the legendary Alabama Theater in Birmingham. Vince will again be joining the Gregg Allman Band for more dates beginning in the spring of 2008.

In 2010 The Vince Esquire Band released their CD, "Back Where You Belong" with the production and engineering assistance of Uncle Don Lopez to warm reception, press and regular radio play. The stand-out track according to fans and peers is "War Cry", a 10 minute monster of a tune that heavily captures masterful production and raw emotion.

In May of 2010 the band was personally invited to play the wrap party for the upcoming Adam Sandler film, "Go With It." The only stipulation being that Adam would get to jam several tunes with them, and he did.

The Vince Esquire Band is currently concentrating on working out some new material with the goal to expand upon their capabilities as musicians and not just produce "more of the same".

Vince's future goals are to secure a recording contract, go on a world tour and someday "play on Austin City Limits".

https://www.youtube.com/watch?v=FmjgiS6cFKo
No audio samples have been linked to this profile.

Soul Kitchen Voted MauiTime Best of Maui 2017 Best Band!
“Soul Kitchen has been entertaining us with their diverse upbeat style for five years now. Their recent video Voodoo Workin celebrates cajun roots with a zydeco sound, but our readers know all this because they voted them Best Band on Maui! Follow their Facebook page to find out where they will jam out next”
— MauiTime Best of Maui 2017

“It's not possible to write a review good enough for this band! They played for our wedding last week and blew everyone away. The sound was on point, the songs were a perfect mixture of blues, jazz, soul, and zydeco, and everyone young and old had a great time dancing the whole night. Soul Kitchen went above and beyond to make our wedding night so special, we felt like we had a one in a million performance!! If you want to skip the DJ for your event, and you want the best Maui has to offer you MUST book Soul Kitchen.”
— Briana H.
No audio samples have been linked to this profile.